Interview with Andrei Florian. Discovered in Amsterdam, played in Bucharest.

Also, the former world no. 1 Nicole David was training there. Actually, when I got to meet her I didn’t know who she was.

Andrei: Thank you! Actually, thank you twice, mainly for starting this League and making sure now it has a community around it that’s growing in skill with every new edition. Also, love the magnets idea!

SA: Tell us a few words about you.

When did you discover squash for the first time? Tell us a few words about that experience.

A: I discovered the sport in 2012. I was doing my Master’s degree in Amsterdam, and incidentally the student housing was right near a squash club – SquashCity. A friend from Chile took me there, and it was quite impressive. It had 13 courts, placed on two floors, a big restaurant/bar area in the middle from where you can chill and watch the matches. Also, the former world no. 1 Nicole David was training there. Actually, when I got to meet her I didn’t know who she was. My friend that introduced me to the sport, and obviously was a better player, used to challenge me to play for beers saying that it would motivate me to up my level. It was after one of these matches when we were having that beer that I got introduced to her.

I got hooked after the first matches, and even started to come by myself during breaks to train, even joined their local league, but because I never had a proper introduction to the sport from a coach I didn’t see too much of a progress. Thus, when I came home in 2013 I took a long break, until 2015 when I decided to take up some lessons, which really helped, but did not follow through and ended up pausing again. I really started to train properly again in 2017, when I met Gelu.

A: I guess it was the combination between the fast paced rhythm and the competitiveness. I also liked that, compared to tennis, it seemed more democratic. It wasn’t about who had the most powerful serve or the hardest shot, and due to the fact that I never did any organised sports growing up this made it less intimidating.

How do you feel about your win? It is you first, right?

A: Yes, indeed my first one in the league. I think last time I played I placed 4th. Of course, I enjoyed it, but I do feel that perhaps a lot of the favourites where missing. Also, I think Darren was already exhausted when he reached the final, so that did help.

SA: What helped you win this time?

A: I managed to not let my emotions get the best of me, and that helped me stay focused. I find that especially important for pressure moments, like for me that’s when I’m leading and I end up concentrating on the result rather than the game. So, this time I managed to be more relaxed and this helped me be a lot more precise, get that ball into the back corners.

SA: Which has been the toughest match and why?

A: The semi-final was the toughest one. I won the first set, but Alex came back on court very motivated and at one point it was 7-1 for him, and I think I lost the second set with a 5-6 point difference. The last set was really close and I think I actually won it with kind of a lucky shot (sorry Alex). 🙂

SA: What learnings are you taking out of this experience?

A: For me it’s really about not being tense on court and actually trying to enjoy the experience. I think there is a nice community that gathered around the league, and they all enjoy a bit of a friendly competition.

Which is the biggest challenge as a player that you faced in the past 12 months while taking part in tournaments?

A: Actually, the toughest thing was to perform at my best level in competitions. I feel great and relaxed while training, but in tournaments it has been really hard to focus. Somehow this also made it tricky for me to track my progress. But in the end I feel perhaps it’s more important to feel good about your game, enjoying yourself out there and being content with playing at your best level even if that doesn’t mean you will win.

SA: What do you think that squash needs in order to attract more players to practice it?

A: Of course social squash events are going to bring in more people, but I think we can all do our own part. The casual players are good ambassadors to the sport, and dedicating a couple of sessions to bring interested friends with us to show them the ropes and then directing them to a professional coach can really help. At the same time, supporting the Romanian Squash Federation, even if not with a lot, it will still be significant.

SA: Any final thoughts for the squash players out there?

A: Hope to see you in great numbers at the RSF and club tournaments from now on as well. Thanks!

SA: Thank you Andrei for accepting our invitation to share your squash story here. We loved it and we wish you to continue for a long time your beautiful squash journey!

Andrei Florian, the player in the middle. 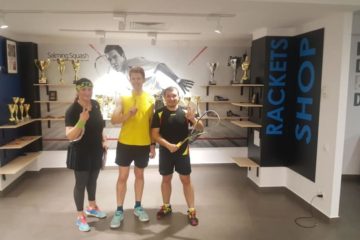 Interview with Darren Willman. An Australian in Romania.

I have recently started to get my old groove back from almost 20 years ago. Yes, you read that right, I took about 20 years break from the sport! SquashAddict: Congrats for getting second at Read more…