I was saying in my previous post that it all started with an invitation from Dragos. Now, let’s see what and why was so special about what followed and how that contributed to falling in love with squash.

March 31st 2017: My first meeting with a squash court. Dragos had everything ready for me: a squash racket and very clear instructions about the rules. Then, some basic advices on how I should play.

What I loved about all these was the fact that from our first encounter he coached me to become a worthy opponent for him. It surprised me, because most people are afraid to lose. But this was not happening for Dragos. He was motivated by a desire to share, teach and become better (both of us).

I feel this was one key ingredient of why I fell in love over night with squash.

Even if we played only for one hour, he kept on adapting his next rounds of advices to my level of play. He encouraged me a lot and in the same time kept on pushing me for more. I have no idea when the hour went by, but I know for sure that I was already hungry for more.

I was wisely told that is good to stop for one hour only because there will be pain. I assured Dragos that I am in very good physical shape (as he could see on the court) and I would not feel anything the next day. Still, we stopped at one hour, but in the same time we scheduled for a second squash encounter the following week.

[…] Dragos told me about this in one of our first games, but at that time it sounded just like theory to me. Still, I did not reject the idea. But as the months passed by I have started to feel this little by little in my life. The more I was playing it every week, the more relaxed and focused I seemed to be in my day-to-day life: at work, with my family, friends etc. […]

[…] since I’ve met you (thanks to Dragos), we’ve spent together around 335 hours. Our first encounter happened exactly (tomorrow) 2 […] 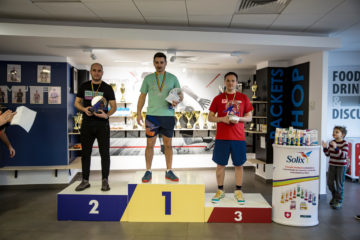