Published by mihailmusat on 24 February, 2020

Below, the story of how I ended up on winning 3rd place this year instead of loosing in first round, how I thought I would.

Few days prior to the tournament I saw the draw for my division. Due to my rankings (affected by the lack of presence at national tournaments in the past 12 months) I needed to play a qualifying round game to pass to first round on the main draw.

Two things started to settle in my mind as questions: (1) will I actually make it to the first round? I’ve played before with this guy, but what if he improved more than I did in the past year? All the work that I’ve put in, and not even qualify in the first round? How would that be? (2) even if I qualify, then I would be playing Alex I. So, again, the doubt and disappointment of not being able to even pass first round.

This was all happening on Wednesday, prior to the tournament itself. Then, on Thursday evening the Club League was about to happen. Even though there were only 2 days left before the National Championship, I’ve decided to not skip the League.

During all 4 games at the League I felt that my body and mind were not there. I felt so tired physically and mentally exhausted that nothing was working out in my game as I would have hoped for. Somehow though I managed to fight my way to the final. But there I was about to meet Alex I (yes, same one that I was about to meet at the National Championship too, in two days). We’ve played before and I could never tell prior to a match who is going to win it. But on Thursday evening it was clear: Alex. He won 3-1, and this defeat left a bigger question mark in my mind for the encounter that was to follow in two days, in round 1.

Once I left the Club on Thursday night I knew that if I will go to the tournament in the same physical and mental shape, I am scheduled for exclusive defeats. And that would lead to major frustration. Thus, I’ve decided to take a day off the next day to have some rest prior to the National Championship. Instead of being disappointed that I did not skip the League, I’ve decided to take some lessons out of it. The next one has been to cancel my training session which was scheduled for next morning (Friday morning). This way I’ve reserved Friday for rest, massage and mental relaxation.

Speeding up ahead: Saturday morning, 10:00 AM. The time scheduled for my first game, qualifying round. From the warm-up I realise that I am feeling good physically and mentally. I was of course nervous as I am at any tournament, but happy to feel well. Lucky enough to have my coach, Gelu, in my corner, I’ve started the first set with a good plan. I’ve managed to keep ahead on the board in every set, and so I’ve passed the first test: 3 – 0.

If you do not believe enough in yourself, take along your side someone who does. Of course, it helps if that someone is also a person who you trust in that field and you can rely upon for a good advice.

Start with a plan in mind. Without a tactical plan in mind, the chances of playing the other players’ game are way higher. And playing someone else’s game is very dangerous ground.

Jumping to the first round game now: 12:30 PM with Alex I. Not yet recovered after the loss suffered two days prior to this game, the above two lessons helped a lot. And not only prior to the game, but also during every game break. I checked with Gelu after each game and adjusted the game plan here and there. I managed to stay ahead here too and the final result proved me wrong: 3 – 0 in my favour.

At this time I’ve started to be in a better place and trust a little bit more my game and the capacity to execute a game plan. This helped a lot for the third match of the day where I was to meet Tibi from Brasov, who in the qualifying round won against a player from my Club who is about the same level as me.

15:00 – the time for my third match of the day. I was to play an opponent older than me and who was having a game style different than most of the guys I am playing with. A very clean style in the back of the court and lethal drops in the front of the court. The above Third learning made the whole difference for this match. It would have taken me at least 1-2 sets to figure out how to win, but with the help of my coach I started with the right plan from the first set. It’s always better to win 3 – 0 whenever possible, and this proved to be the case for this match too.

Conclusion of day 1: All the three learnings above can make the whole difference in-between loosing or winning.

Day 2 was about to start early, with my semifinal game at 9:30 AM. I was about to play with Seed 1 of the B division. Alex N used to play many tournaments in A and B divisions, thus having way more experience than me.

I’ve started with the right plan and also being able to really execute it right. Thus, I managed to win the first set. Unfortunatelly this proved to be the only one I was able to win. Both mentally and tactically Alex N outran me. I was not able to come back in the game, but on the contrary I’ve ended up more and more frustrated, nervous and lacking confidence that I could have a chance with him. Bit by bit I went further away from my plan, ending up playing his game entirely.

Lesson four: Playing the game of the opponent, especially when you cannot be better at it than him, it will lead to a sure loss.

Lesson five: If you cannot believe in yourself and neither the support person can compensate for that (coach in my case), you’re most likely to lose the match.

Even though I did lost my confidence that I could win while playing, after the match ended I was so pissed at myself for loosing. I felt completly trapped during the match. Trapped in my mind and in his game. And one of the challenges of the squash matches is that sometimes they do end so fast. There is very little to no time to get back on track, especially when the mental aspect is the challenging one, as it was for me here.

Lesson six: I did knew it and did took the time for it in previous encounters, but missed applying it here. When I start to go mad, I need to take that out from my system imediately during the first game break.

I might have had a better chance to get back in the match in the 4th set with this lesson applied. Well, next time.

After the match I took my time to cool down and once this done, I’ve moved my focus towards the 3rd place match. I was still in a good position taking into account my fears prior to the tournament. Of course it would have been better to play the final, but this was really good to.

For this match I was about to be on my own (as my coach needed to be with a junior player), with an opponent again more experienced than me. I took this as a test to prepare with Lesson three from above on the model provided by my coach.

12:00 PM – game time. I start strong, both with my game as well as with my mind. I manage to stay focused and execute what I had planned. I’ve managed to read Lajos’ game well enough to stay in the game and as a result I’ve put the first game in my favour on the board.

Second game proved a totally different story then. The roles reversed and everything went in his favour. With the speed of light I find myself 2 – 9. At that point I decide to fight back with everything I can. I was aware that there is no way to get this set, but I needed at least to know I am giving everything I had. In my mind I was already seeing him as winning the entire match, but regardless, I wanted to fight. It was the last match of the tournament so I had no intention of keeping any resources to take home. I was about to leave everything on court. The result was visible on the board, even though he won the set 11 – 5.

Third and forth game then resembled more with the first one, feeling somehow less resistance from Lajos than in the first and for sure less than in the second. I was somehow surprised, but did not spent too much on that. I kept my focus and fought to close it out as soon as possible.

What to say: when the match ended I felt amazing! Amazing! 3rd place at the National Championship, B division. Amazing feeling!

Lesson seven: If the opponent seems to be out of track, keep him there and close the match as soon as possible. It is an opportunity to keep and focus and not loose it. Gaultier is an amazing example with his 3 – 0 wins in the opening rounds of the tournaments.

Later on Lajos and me bumped into each other and I did wanted to check with him what happened in the 3rd and 4th games. He said that he felt mentally. I was surprised to see that, especially after his performance in the 2nd set. Still, not entirely surprise taking into account my mental comeback from 2 – 9.

Lesson eight: Be aware that it might not be only you to struggle mentally (or/and phisically) but also you opponent. Don’t make him stronger in your mind, but make yourself stronger.

To conclude: The difference between loosing and winning it can be highly influenced by the percentage of lesson know and applied, regardless of the external factors. 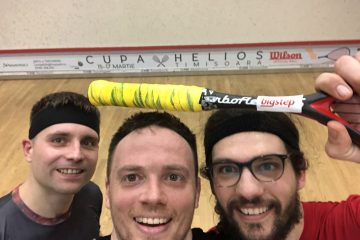 Since the beginning of the year I have been already (as amateur) taking part in 10 squash competions (almost 1 per week as average). Club level, local level and national level.